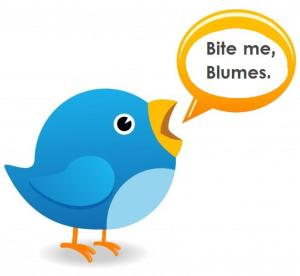 That little blue bird is the worst.

When you register for Twitter, the odds are really stacked against you, and that little fat-beaked, blue feathery tormenter is pulling the strings, laughing all the way to the bank.

That’s more or less my personal experience with Twitter early on.  Upon first use, it was a bit confusing- it lacked the flash and browser-freezing pizazz of MySpace in its heyday, and the alien layout seemed worlds away from the friendly confines of Zuckerberg land, AKA Facebook.  The logo might as well have been a splotch of white bird poo instead.

But as time went by, living in a fast-paced world of retweets, short character limits, and starting every sentence with the “@” symbol didn’t seem as daunting as it originally did. Hey, if Kevin McCallaster could get used to his creepy torture basement and devil-furnace in Home Alone, then I could, suck it up, grow a beard, be a real man and tweet.

Yeah, we all know it’s the blue bird’s nest, but you’ve laid an egg of a nice little group of fellow social networking friends, and much like a comfy long-worn butt-imprint in the couch cushions, you’ve found yourself a sweet little groove to settle into.

Talk about happy endings…  Maybe all it took was time!   Maybe this Twitterin’ thing ain’t so bad after all.

Then Sydney Leathers came and ruined it all…

In a minor attempt at a self-deprecating tweet, I aimed to poke fun at Anthony Weiner’s texting buddy’s follower number comparing it to my modest amount of 172.  I was expecting a far lower number, then, like a bucket of ice cold water right in the face,  it hit home just how many more followers this faux celebrity had over me.

Let me put it this way, if my Twitter account was feeling like Kid N’ Play’s House Party, stupid Sydney Leathers just called the cops to break up the shindig at the best part.

“What you doin’ Leathers?”

THE BAD NEWS:  These D-list celebs are milking their head-scratching 15 minutes of fame, with a shockingly high number of Twitter followers*  that will make you barf, only to feel safe, then barf again.

THE GOOD NEWS:  By the time you finish reading this piece, most of their 15 minutes will be well over.

(Shameless plug:  You can find me on Twitter:  @99redblumes)

I (somewhat) proudly present to you…

Known For:   Somehow being the trashier of the two parties involved in the embarrassing Anthony Weiner scandal. Since her admission that she and the disgraced politician had a “more than friendly” texting relationship, she’s taken lockjaw to her sputtering fifteen minutes of fame and is shamelessly following it into its grave.

Because there’s no high roads in Weinerville, Leathers bought a one-way ticket to the dump instead– quickly accepting an offer from Vivid Entertainment and embracing her current career as a wannabe adult-film star.

I’ll also save you the Hostel-esque torture of reading her painful Twitter feed: She hates Anthony Weiner.  So much in fact, she mentions him in nearly every tweet and appeared uninvited to confront him at his concession party following his failed New York Mayoral campaign last week.

Plus, her last name is an insult to cows everywhere.

Scholarly Tweet:  “Pretty sure breast implants are the best thing that’s ever happened to me.” (9/5/13)

Known For:  Being the “Long Island Lolita”- basically the brand name version to the generic Sydney Leathers.  Take a gander, you gander-takers:

1991:   Having an affair with non-heartthrob, Joey Buttafuoco, a man who basically looks like a human version of Zubaz pants, at age 16.

1992:   Shooting Buttafuoco’s then-wife, Mary Jo, in the head at point blank range at her front door, leaving her seriously wounded, as if being married to him wasn’t painful enough.

2007:   Turned troubled life around and started career as an adult entertainer.

2009:   Signed a deal with Lee Entertainment to become a stripper, doing monthly shows.  Stating she will proudly strip until, her fans say, “Dear, please put your clothes back on. You’re too old.”  Which is so obviously true, it should’ve been done in big giant skywriting.

2013:    Dwarfed me in Twitter followers, but in her defense, she still hasn’t shot anyone else.

Known For:  Being the one guy in O.J. Simpson’s Ford Bronco who didn’t murder someone that June evening in 1994, eating McDonald’s with murderers, never having tied a tie in his life, managing to say the word “umm” more times on the witness stand than me trying to order at Starbucks, looking exactly like a guy named Kato Kaelin should look.

“Kato ate THIS MANY of my Chicken McNuggets!”

Known For:  Being the vocalist for early 00’s one-hit wonders, Crazy Town (this band), a sought-after gig that Sinatra could only wish he’d have lived to see, also a career of rehab reality shows that actually had more legs than his career as a musician.   Dr. Drew sends him a fruit basket as thanks every Christmas.

(Blumes Fun Fact:  Back in 2000, Shellshock’s imbecilic “Everyone PLEASE look at me!” appearance created a worldwide eyeroll so big, it actually tilted the Earth off its axis.)

Known For:  Being the less-talented half of “Speidi”, the ultimate portmanteau of 21st Century incompetence.  Aside from being married to fellow reality television star/socialite/plastic surgery guinea pig, Heidi Montag (of MTV’s The Hills fame), Pratt became infamous for ruffling feathers, frequenting social hotspots where paparazzi could find him, growing the most awkward beard humanly possible, and not having to resort to working in clown dunk tanks at county fairs… yet.

Current Number of Followers:  979,112    (For a comparison, that’s nearly ONE THIRD of the followers Pope Francis currently has.  I’ll wait a minute so you can get Advil for your headache.)

Known For:  Portraying super-geeky Samuel “Screech” Powers on multiple editions of 90’s high-school comedy series, Saved By the Bell.  A squeaky-voiced clod with a terrifying white-guy afro who devolved into more of a bumbling boob-caricature as the series aged.   The scientific term is “Urkeling” his character.

Diamond’s career was truly just a cubic zirconia, as he took a historic header straight down Crap Mountain–  declaring bankruptcy, appearing on a variety of two-bit retread reality shows, failed attempts at music and comedy, along with marital troubles, online harassment, house foreclosure, and a released adult-video.

“Congrats Elizabeth Berkley!  Unless there’s a Showgirls 2, you’re not going to win ‘Most Awkward Career Choice” at the next Saved By the Bell reunion!”

Blumes note:  Of course this is all in good fun.  In the end, quality reigns over quantity everytime.  I’d take my excellent fellow Tweeters any day of the week over Kato Kaelin’s thousand of nameless cronies.