Welcome to an area definitely far outside of my wheelhouse.

Anyone who has spent just ten minutes around me can tell you I have about as much grasp on the hip-hop culture as the Jacksonville Jaguars have on a shiny Vince Lombardi trophy.

Popular terms like “yo” and “holla” would look like bad French spilling out of my awkward mouth.  Plus, the word “crunk” is totally lost on me, I can’t explain why there are so many grown men with “Lil” in their name, and don’t get me started on size stickers on flat-brimmed baseball caps.

I’ll admit- it’s simply not my forte, and will most likely never be, which I’m very happy with. Truthfully, it’s good to know deep-down what you like and what genuinely works for you.  (If more people followed that basic idea, maybe Garth Brooks wouldn’t have done this.)

But after looking at these Titanic-sized swings-and-miss costumes of some of the most legendary names in hip-hop, maybe I can pull it off better than I initially gave myself credit for.

“Wow, Blumes is talking about rap? I must be REALLY high, even by Snoop Dogg standards!”

If rap culture has spent the past three decades establishing itself as the cutting edge of trendy fashion, popular vernacular, and sleek style- well then these crappy cracker-crazy costumes just pushed that progress back about two of those decades.

So, together, let’s get down with our funky selves, bust out some killer breakdancing skills, and blast the soundtrack for October 2013. I invite you to throw on “Tennessee” (that song was cool, right?), blast out those human beatboxes (now I know those have to be cool) and get yourself ready for a not so hip-hop Halloween…

(W)RAP IT UP, THESE COSTUMES STINK!

Sure, in 2010, having an official Pauly D. blow-out wig and some orange Oompa Loompa makeup could’ve turned you into the hippest guido on the block at Halloween parties, but what do you do with that wig when it’s 2013?

“It’s got grapes in it! And if you let it sit, then it’ll have raisins in it!”

Well, if someone’s gotta be shot nine times, I think this guy’s costume may make him a prime candidate.

If you’re American, this scenario will ring true…

To satisfy that overwhelming hunger craving, you run out to the nearest convenience store and grab a bag of delicious, delicious Doritos and all their nacho-cheesy greatness.  All ready to rip that bag open and orange-powder-up your fingers, you look down at the jingling store change resting in your palm, and see a freakin’ Canadian quarter sitting in there!

How’d that thing weasel its way in there?!?

They’re like a plague. Next to worthless here, they won’t work in vending machines or parking meters, and the only hope to rid yourself of them is to pawn them off on some other sucker.

Well, leave it to the Canadians to get creative at Halloween, as we see the white guy take on 50 Cent.  Personally, I would’ve been more impressed if he gave it a twisted spin and made a costume of “The Human 50 Cent-ipede” instead, but that’s probably too much change*.

*  Even I thought that joke was horrible!

I think that’s… M.C. Hammer, superstar of the early 90’s whose pants doubled as a tarp for the infield at Fenway Park.

“I’m hiding all my extra parachute pants inside of this pair that I’m currently wearing!”

What can I say about this costumed dingus that the picture doesn’t already scream out?  (AKA…. bad puns approaching…)

Street Cred Score:  1.  (But to be fair, that’s the same number as the actual Hammer, so kudos, guy.)

Psy! We can wear these pants together in the unemployment line!”

I think that’s… The Beastie Boys, groundbreaking New York hip-hop trio who fought for your right to party.  Don’t forget that, ingrates.

Their Beasties threads, while pretty simple, actually aren’t all that bad. Although these three goobers are skirting right on the edge of looking like bad Smurfs rejects, who also happen to hang out together.

Geez, where’s Gargamel when you need him?

These half-dressed girls went with these last-minute no-frills Salt-N-Pepa Halloween costumes when their Thelma & Louise ones didn’t arrive in time.

See ladies?  This is why it’s so important to have an extra emergency floozy outfit hanging around.  Just in case…

Stop! Or my mom will SHOOP!

I think that’s… Eminem, one of the world’s best-selling artists of the past 30 years.

One of Slim Shady’s most prolific singles is the 2000 hit, “Stan”, a near-frightening narrative of stalkerish fan-obsession gone overboard.  Safe to say this dude may have been his target audience for that signature tune, as this doesn’t look like a costume as much as it does an everyday borderline-unhealthy walking homage to the famous Detroitian.

But try as I might, I just can’t trash smart, frugal shopping.  When your Halloween costume consists of just a single bottle of peroxide, it leaves more cash to blow on generically hum-drum tattoos.

“After seeing that costume, this is now the SECOND most awkward moment of my life.”

I think that’s… Kris Kross, backwards-clothes-wearing duo who had one more member than hit songs. Half a hit each guys, not too shabby!

These dufus-y costumes will make you jump jump!… of a cliff.

Well, to be fair- these Kris Kross-inspired backwards-threads would look equally stupid on everyone, regardless of race.

Better watch the amount of liquids you’re intaking at the party gentlemen, keep in mind the fly in those pants is on the wrong side now.  You don’t want to imagine the cringeworthy embarrassment of telling the doctor you ruptured your bladder because you couldn’t access the zipper on your dumb Kris Kross pants in time?

This is just like my tattoo, but it says “HUG LIFE” instead.

Two guys, no shirts, half a brain. 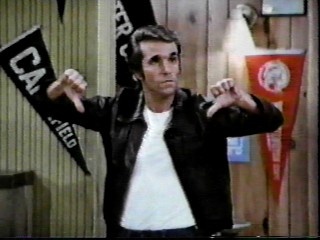 Those costumes insult everyone! Now pull up your pants and eat something!

I think that’s… Flavor Flav, the slapstick member of Public Enemy who never has an excuse to be late to bingo because he wears a giant Bugs Bunny-ish clock around his exhausted neck 24-hours a day.

Welcome to Yo!  MTV Craps!

Sure, it’s been a rough few weeks for Eli Manning and the lackluster New York Giants.  With their big blue wheels stuck spinning firmly in the mud, this football season hasn’t gotten off to the start anyone in the Big Apple has expected.

But all jokes aside, if the G-Men are still winless by the end of October, that costume may be an accurate depiction of how a dejected younger Manning will be spending his bummer of a Halloween.

Awww shucks, how come no one picks on Peyton instead?

I think that’s… Lil Wayne.  I don’t know anything about Lil Wayne.  I think apparently, he may have a unibrow.  I think he went to jail.  I think this nincompoop shouldn’t be too far behind for looking like that.  Not to mention that this guy went the always-popular route of blackface, and then had to draw fake tattoos on top of the makeup.  Tasteless or not, that’s some effort put in there.

Funny enough, that costume makes that guy look more white than he probably did beforehand.  And isn’t the sign of any well-pulled-off costume having to hold a photo of the person you’re supposed to be next to you?  Bravo, young man.

Blumes note:  I stand corrected, I actually do know something about Lil Wayne.  In fact, just this week, I read an article about him guest starring in a most-likely ear-offensive new song by Paris Hilton, and in its brain cell-killing accompanying video. Talk about a spooky October…

Between this terrible costume and that song, it’s officially a toss-up of which is the bottoming-out point of his life.

“On this song, we actually sampled the sound of my great-grandfather turning over in his grave!”